MPEG has been working without interruption for 31 years. In this period of time new industries have continuously joined, existing technologies have continuously morphed and new ones come to the fore. Today MPEG faces another major change and has to “shed its skin” one more time.

MPEG is about compression

MPEG has produced 5 generations of video compression standards, each generation offering more compression (and more features, see More video features). More of the same is expected from the 6th generation (VVC) that MPEG plans to approve as an FDIS in July 2020, 7.5 years after it approved HEVC as an FDIS.

Will industry keep on demanding more compression? I would like to answer with a resolute yes as I believe that there will always be need for more compression, but not always and not necessarily of the “old way”. If we take the example of light field, we see that more compression is needed if distribution of that kind of information is going to become real within the current (human) generation. MPEG has produced an equivalent number of audio coding standards, but the answer to the question “do we need more audio compression?” is, at least in the current time frame, that the compression we have is enough but we need new standards for other non-compression features (6DoF, in the case of audio). The trend is less noticeable in video, but 3DoF+ moves in the same direction as audio, and the exact nature of 6DoF video is still unclear.

There is a need to understand the potential of compression technologies in audio, video and point clouds, interact with industry and develop a vision of compression standards for the years to come.

MPEG is also about systems aspects

This book has re-iterated the role of systems aspects as the enabler of the success of many MPEG standards and the future will not change that role. Actually, the trend toward immersive media will require an even deeper integration between compressed media and the systems that permeate them. This can be seen from the requirements that are being identified in an activity called “Immersive Media Access and Delivery” where four dimensions are identified:

MPEG is lucky to have an organisation that enables cross-domain interaction, but the efficiency of this organisation must be further improved to enable the needed deeper interaction.

Is MPEG only about media?

My answer is no: it is not and should not only be about media. In its past 30 years MPEG has shown that it has been able to add domains of expertise and to talk the language of those domains. If today all the media domains speak the same (technical) language, that is due in non-small part to the efforts made by MPEG to understand the needs of different industries, convert them to requirements, develop the technologies and quantise the standards into profiles and levels. This workflow has been in operation for 27 years, namely since MPEG invented profiles and levels and consistently applied them to talk to different communities using the same language.

The challenges in talking to a new industry, however, should never be underestimated. MPEG has spent more than 3 years talking to, and identifying and validating requirements with the genomic community before starting the development of the MPEG-G standard. This process was carried out jointly with ISO TC 276, a major representative of that community.

MPEG should be ready to respond to communities that request its unique expertise in data compression.

The business context is changing

MPEG does not have much to say on business matters, but its work is highly influenced by business, e.g. in terms of requirements, experts support, timelines etc.

Market spoke and market is right. MPEG should not complain about competition. Operating in a competitive environment is always beneficial because it pushes those affected to do a better job.

This is the easy part of the story. The question, though, is “should MPEG continue undeterred on its way or should it not rethink its role?”

For decades MPEG has managed a large working group, designed multi-threaded work programs, sought and received support by industry, developed close to 200 specifications and hundreds of amendments, drove the evolution and enabled the relentless expansion of the digital media business.

MPEG did all that as a working group, i.e. as the lowest organisational unit in ISO that the ISO/IEC directives recommend to be “reasonably limited in size”.  The reality is that already in 1989 MPEG had 100 members, in 1999 it had 300 members and in 2019 it has a membership of 1500 with 500 experts attending its quarterly meetings.

For 30 years MPEG has played a role much above its status, even though I do not think there should be complaints about the results. MPEG could continue as a working group for another 30 years but from now on it should have a status equivalent to the role it plays. ISO have tolerated the “MPEG exception”, but now they have decided that there should be no exception.

In this book I have explained why the solution of simply making working groups out of MPEG subgroups is not going to work. This will simply kill MPEG.

Something more creative is needed

Today individual groups manage their liaisons but in the new organisation the Liaison and Communication AG would coordinate outgoing liaisons and communications. 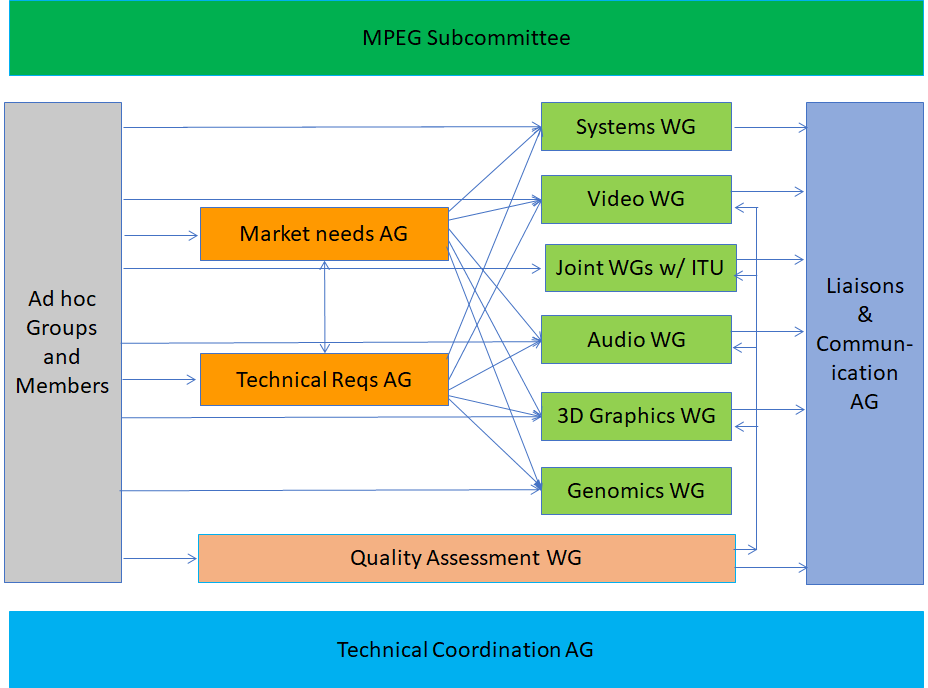 The WGs would include the existing technical subgroups, e.g. the Quality Assessment WG that would continue offering its services to the media compression WGs, and the Genomics WG.

The Subcommittee would hold quarterly meetings with its WGs/AGs and would hold sessions as required by the need to progress the work of its WGs/AGs.

The future always brings new challenges. Most often these have been managed relying on the experience of the past, especially when this has worked well.

6.3 – MPEG is working for more success