MPEG’s most precious assets are its members. As MPEG is an ISO working group, to be entitled to attend and actively participate, experts and/or their companies must be members of one of the 162 national standards organisations who are members of ISO (or as an ap­proved liaison officer from another organisation). Respondents to an MPEG Call for Evidence (CfE) or Call for prop­osals (CfP) are allowed to attend the meeting where their proposal is pres­ented for the first time. To continue attending, however, proponents are required to become formal members (and they have better to do so if they want their proposals to stay part of the standard).

Figure 4 depicts the current MPEG organisation. In its 30 years MPEG has created and dis­ban­ded several groups created for specific needs. More about the history of the MPEG groups and their chairs can be found here.

New ideas are typically submitted to the Requirements group. If they are considered worth of further explorations, they are typically discussed in ad hoc groups (AhG) after the meeting. An AhG will report its findings at the following MPEG meeting. After a few iterations, MPEG will produce a Call for Evidence (CfE) or aCall for Proposals (CfP) with due publicity in the Press Release. At that time, an AhG is charged with the task to disseminate the CfE or CfP, prepare for the logistics of the tests and perform a first assessment of the responses.

This does not mean that the Requirements group is no longer involved in this standard because the group typically continues the development of Use Cases and Requirements while the technical work progresses. When necessary, requirements are reviewed with the appropriate technology groups and may give rise to new CfPs whose outcome is fed into the work of the relevant technology groups after an assessment.

Today the task of the Test group is no longer confined to the assessment of the quality of proposals at CfE and CfP time. Designing and executing appropriate quality tests in support to Core Experiments has become the norm especially in the Video group.

If a Call requests Proposals, the Requirements group, in conjunction with the Test group and possibly one or more technology group, reviews the result of the AHG and makes a final assessment. If the technologies submitted are judged to be sufficient to initiate the development of a standard, the activity is transferred to that/those group(s) for standard development.

The current MPEG Chairs are given in Table 2. They come from a variety of countries (CN, DE. FR, IT, KR, US) and organisations (small/medium size and large companies, and Universities).

Feeding documents into the MPEG process is of vital importance because the number of submiss­ions uploaded can easily cross the level of 1000-1500 documents. Today it is hard to imagine how MPEG could operate if it were still “paper-based”. MPEG shed its skin in October 1995, when Pete Schirling (then with IBM) developed a document management system that al­lowed members to upload their documents and download those uploaded by all other members. Wo Chang (NIST) in 2000 and Christian Tulvan (Institut Mines Télécom) in 2005 took over and improved the system that ensures the high efficiency of MPEG operation.

How to know what happens where

For MPEG experts a place with so many “hotbeds” discussing requirements, and assessing, integ­rating and testing media technologies is exciting, but how can MPEG experts know what happens when and where at a meeting? Christian Tulvan has come to help again and designed a system that answers that question. MPEG members can have a full view of which meetings are held where and when to discuss which topics or documents. The design is responsive so MPEG experts can get the information from their smartphones.

Figure 5 shows how the service looked like at MPEG 124 (October 2018). This particular view shows all meetings of all groups, but filtered views are possible. By clicking on a meeting, the user obtains details (room, linkes to documents to be discussed etc.). 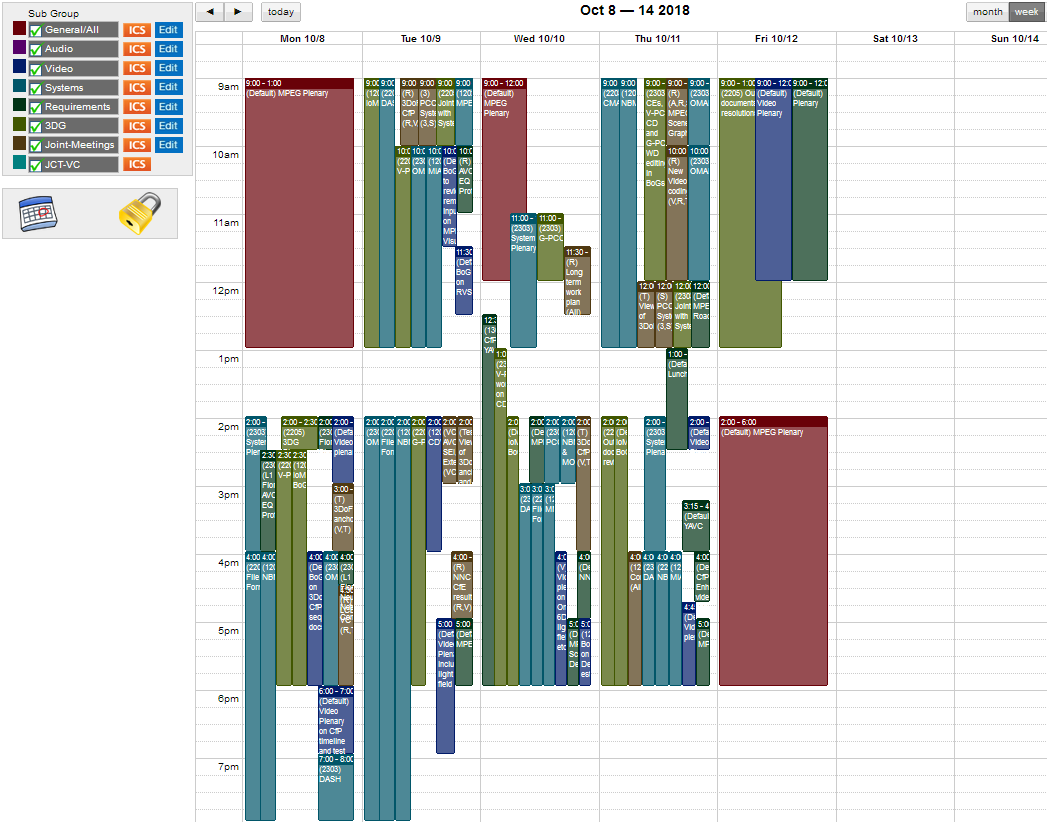 Figure 5 – Coping with many parallel meetings

Another major development made by Christian provides the chairs with a series of functionalities to manage the MPEG workplan and timeline. Some of these, like the one below, are open to MPEG members.

The figure shows the MPEG timeline for the portion related to the MPEG-I, MPEG-CICP and MPEG-G standards. On the top there are icons to create new activities, show different table previews, provide project-wise views and more. 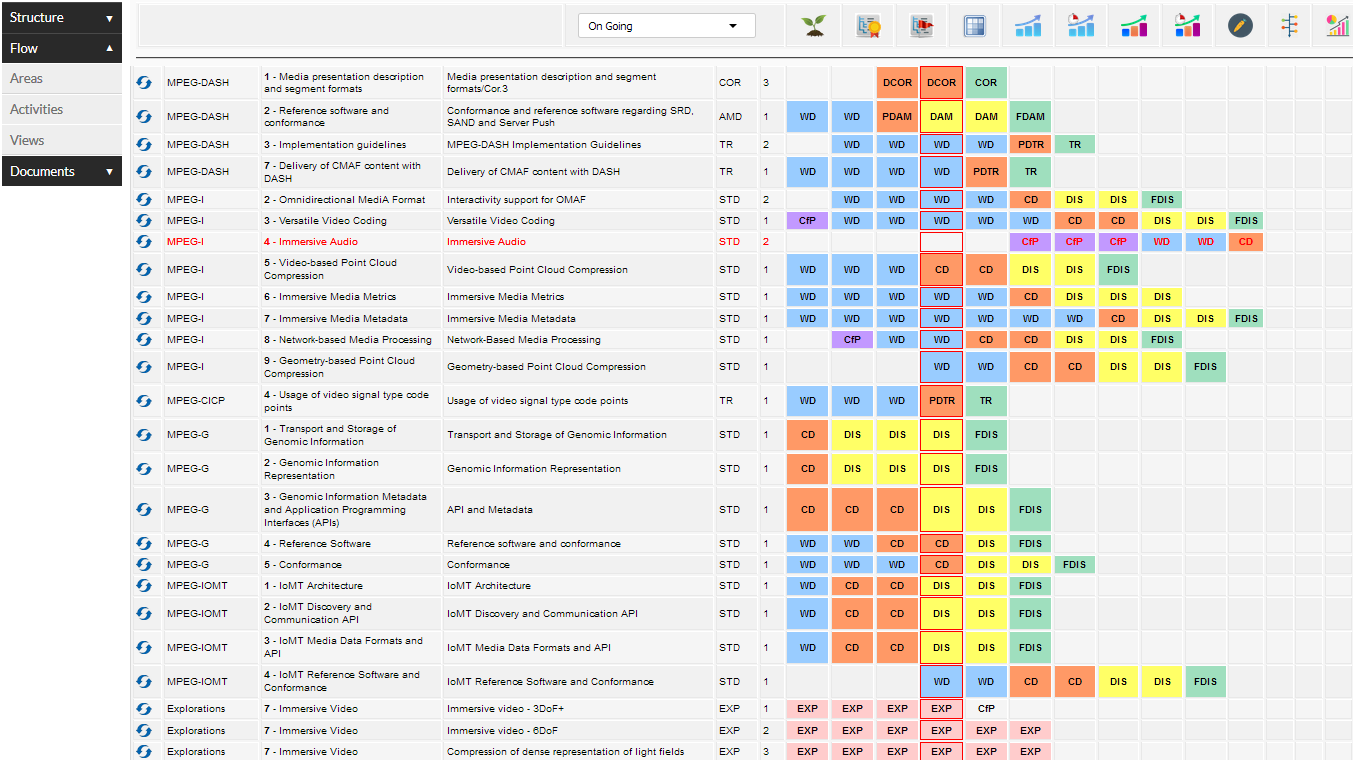 Another remarkable functionality is the possibility to create the document that collects all the results from a meeting. Group chairs enter their own results independently and the system organ­ises them by standards and integrates them in a single document for approval at the Friday plenary. This has made the review of decisions shorter and allowed MPEG to slash the time taken by plenaries.

MPEG defines as assets the data associated with the development of standards: URIs, Schemas, Content, Software and Conformance testing data. The first two are publicly available.

By Content assets we mean the collection of all test data (content) used for CfEs and CfPs, and in subsequent Core Experiments. MPEG relies on the good will of companies interested in a standard to provide relevant test data. These are typically licensed for exclusive use in MPEG stan­dar­disation because they typically have high value, e.g. from the content and technology viewpoints. Content owners license their content directly to individual MPEG experts.

Software assets is the collection of all software developed or under development as reference software of MPEG standards. With the approach taken by MPEG to develop most of its standards from reference software and give it a normative status, its importance can hardly be overstated.

Content, Software and Conformance testing data for most data used in the development of MPEG standards in the last 30 years are stored in the Media Repository, Software Repository and Confor­mance Testing Repository hosted by Institut Mines Télécom. We are talking of a total of 8 TeraBytes of data.

This article can only give an idea of the level of commitment and dedication of so many MPEG members – with the support of their companies. Of course, MPEG standards are produced by MPEG experts, but the MPEG process works because so many other people and organisations contribute, some in a visible and some others in a less visible form, to make MPEG what it is.

A vision made real – Past, present and future of MPEG