In days long bygone, standardisation in what today we would call the “media industry” followed a rather simple process. A company wishing to attach a “standard” label to a product that had succeeded in the market made a request to a standards committee whose members, typically from companies in the same industry, had an interest in getting an open specification of what had until then been a closed proprietary system. A good example is offered by the video cassette player for which two products from two different companies, ostensibly for the same functionality – VHS and Betamax – were approved by the same standard organisation – the International Elec­trotechnical Committee (IEC) and by the same committee – SC 60 B at that time.

Things were a little different in the International Telecommunication Union (ITU) where ITU-T (then called CCITT) had a Study Group where the telecommunication industry – represented by the Post and Telecommunication Administrations of the member countries, at that time the only ones admitted to the committee – requested a standard (called recommendation in the ITU) for digital telephony speech. ITU-T ended up with two different specifications in the same standard: one called A-law and the other called µ-law.

In ITU-R (then called CCIR) National Administrations were operating, or had authorised various entities to operate, television broadcasting services (some had even started services before WW II) and were therefore unable to settle on even a limited number of television systems. The only thing they could do was to produce a document called Report 624 Television Systems that collected the 3 main television systems (NTSC, PAL and SECAM) with tens of pages where country A selected, e.g., a different frequency or a different tolerance of the colour subcarrier than country B or C.

Not unaware of past failures of standardisation and taking advantage of the radical technology discontinuity, MPEG took a different approach to standardisation which can be expressed by the synthetic expression “one functionality – one tool”. To apply this expression to the example of ITU-T’s A-law – µ-law dichotomy, if MPEG had to decide on a standard for digital speech, it would

The process would be long – an overkill in this case because a speech digitiser is just a simple analogue-to-digital (A/D) converter – but not necessarily longer that waiting for a committee to decide on competing proposals with the goal of selecting only one. MPEG’s result would be a single standard providing seamless bitstream interoperability without the need to convert speech from one format to another when speech moves from one environment (country, application etc.) to another.

If there were only the 10 points listed above, the MPEG process would not be much more complex than the ITU’s. The real difference is that MPEG does not have the mindset of the telecom industry who had decided A-law – µ-law digital speech 50+ years ago because it serves a large number of industries.

Where lies the MPEG difference

MPEG is different because it would address speech digitisation taking into consideration the needs of a range of other industries who intend to use and hence want to have a say in how the standard is made: Consumer Electronic (CE), Information Technology (IT), broadcasting, telecommunications and more. Taking into account so many views is a burden for those developing the standard, but the standard eventually produced is abstracted from the small (or big) needs that are specific of individual industries. Profiles and Level allow an industry not to be overburdened by technologies introduced to satisfy requirements from other industries that are irrelevant (and possibly costly) to that industry. Those who need the functionality, not matter what the cost, can do it with different profiles and levels. Figure 10 depicts how MPEG has succeeded in its role of “abstracting” the needs of client “digital media” industries currently served by MPEG.

Figure 10, however, does not describe all the ecosystem actors. In MPEG-1 the Consumer Electronics industry was typically able to develop by itself the technology needed to make products that used the MPEG-1 standard. With MPEG-2 this was less the case and independent companies offering encoding and decoding chips sprang up. Today the industry implementing (as opposed to using or selling products based on) MPEG standards has grown to be a very important element of the MPEG ecosystem. This industry typically provides components to companies who actually manufacture a complete product (sometimes this happens inside the same company, but the logic is the same).

MPEG standards can be implemented using various combinations of software, hardware and hybrid software/hardware technologies. The choice for hardware is very wide: from various integrated circuit architectures to analogue technologies. The latter choice is for devices with extremely low power consumption, although with limited compression. Just about to come are devices that use neural networks. Other technologies are likely to find use in the future, such as quantum computing or even genomic technologies.

How the MPEG process takes place

Figure 11 does not fully describe the MPEG ecosystem. More elements are provided by Figure 12 which also describes how the MPEG process actually takes place.

Figure 12: The MPEG process in the MPEG ecosystem

The new elements highlighted by Figure 12 are

Using Figure 12 it is possible to describe how the MPEG process unfolds (the elements of the MPEG ecosystem are in italic).

MPEG’s role cannot be described by the simple “Standards Provider – Client Industry” rel­at­ion­ship. MPEG is a complex ecosystem that works because all its entities play the role that is proper to them.

MPEG standards are glued together

MPEG started with the idea of a standard for video compression and soon it became clear that an audio compression standard was needed at the same time because in most applications video without audio is not really useful. Then it also became clear that playing audio and video after delivery in the way intended by the creator did not come for free and so came the need for Systems standards. Moving on, a File Format also became a necessity and today, when MPEG develops the MPEG-I standard, a lot more technologies are found necessary to hold the pieces of the system together.

MPEG has devised an organisation of work that allows it to deploy the necessary level of expertise in specific technology areas, e.g. in video and audio coding and file format. At the same time, however, the organisation allows it to identify where interfaces between different media subsystem are needed so that users of the standard do not discover unpleasant surprises when they integrate solutions.

Figure 13 is a good model of how most MPEG standards are developed. Different groups with different competences develop different parts of a standard, say, MPEG-I. Some parts are designed to work together with others in systems identified in the Context-Objectives-Use cases phase. However, many parts are not tightly bound because in general it is possible to use them separately. In other cases, there are parts of different origin that must work tightly together and here is where MPEG provides the “glue” by using ad hoc groups, joint meetings, chairs meeting etc. 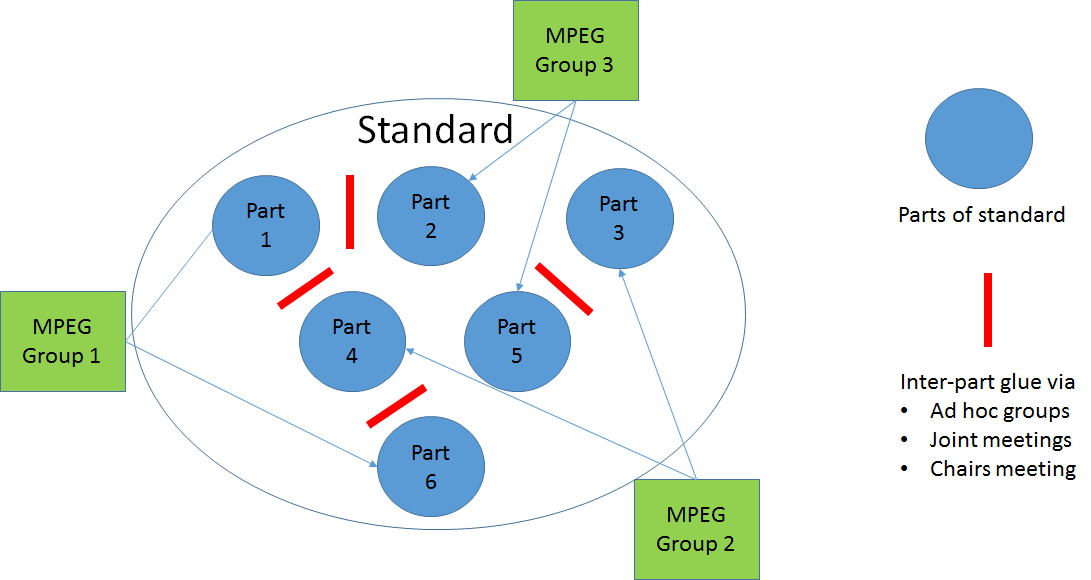 This work method was developed and refined over the years and has served well to provide industry with standards that can be used as individual components or as a system.

Here are examples of how standards for different purposes have achieved the goal:

MPEG is a complex ecosystem that has successfully operated for decades serving the needs of the growing number of its component industries. Everything human is perfectible, but whoever wants to lay their hands-on MPEG should remember the following

7 – Planning for the future of MPEG