How are all these technologies specified and integrated in MPEG standards to respond to industry needs? This chapter will try and answer this question by starting, as many novels do, from the end (of an MPEG meeting).

When an MPEG meeting closes, the plenary approves the results of the week. This marks the end of formal collaborative work within the meeting. Back in 1990 MPEG developed a mechanism – called “ad hoc group” (AhG) – that would allow experts to continue a form of collaboration. AhGs allow MPEG experts to continue working together, albeit with limitations:

On average some 25 AhGs are established at each meeting. There is no one-to-one correspondence between MPEG activities and AhGs. Actually, AhGs are great opportunities to explore new and possibly cross-domain ideas. Examples of AhG titles are

What happens between MPEG meetings

Most AhGs hold scheduled meetings on the weekend that precedes the next MPEG meeting. These are very useful to coordinate the results of the work done and to prepare the report that all AhGs must make to the MPEG plenary on the following Monday.

It should be noted that AhG meetings, including those in the weekend preceding the MPEG meeting, are not formally part of an MPEG meeting.

MPEG chairs meet on the Sunday evening to review the progress of AhG work, coordinate activ­ities impacting more than one Subgroup and plan activities to be carried out during the week including identification of joint meetings

An MPEG meeting at a glance

Subgroups start their meetings on Monday afternoon. They review their own activities and kick off work in their areas. Each subgroup assigns activities to breakout groups (BoG) who meet with their own schedules to achieve the goals assigned. Each Subgroup may hold other brief meetings to keep everybody in the Subgroup in sync with the general progress of the work.

On Friday morning all Subgroups approve their own results. These are automatically integrated in the general document to be approved by the MPEG Plenary on Friday afternoon.

A key MPEG feature is the immediate availability of the necessary technical expertise to discuss matters that cross organisational boundaries. The speed of development and quality of MPEG standards would hardly be possible if it were not possible to deploy the necessary expertise to address multi-faceted issues in a timely manner.

Let’s take as an example this video: the basketball player is represented as a compressed dynamic point cloud in a 360ᵒ video. The issue of integrating the two components may be raised at a meeting and/or discussed by the Chairs where the need for a joint meeting is identified. This is proposed to the MPEG plenary and held with the participation of Requirements, Systems and 3D Graphics Coding experts. The outcome of such a meeting may be anything from the acknowledgement that “we don’t know well enough yet”, to the identification of technologies that can simply be dev­eloped as a collaborative effort of MPEG experts or require a CfP.

For example, the table below lists the joint meetings that the Systems Subgroup held with other Subgroups at the January 2019 meeting.

Table 3 – Joint meetings of Systems Subgroup with other Subgroups

NB: VCEG is the Video Coding Experts Group of ITU-T Study Group 16. It is not an MPEG Subgroup.

A bird’s eye view of an MPEG meeting

Figure 7: MPEG work from the end of a meeting to the end of the next meeting

What is “done” at an MPEG meeting?

There are around 500 of the best worldwide experts attending an MPEG meeting, an event that mobilises an incredible amount of brain power. The following explains how this brain power is directed.

An example – the video area

Let’s take as example the work done in the Video Coding area at the March 2019 meeting by looking at the 3 columns of  Table 4:

The outcome of an MPEG meeting

Figure 8 gives the number of activities for each type of activity defined in the legend (and others that were not part of the work in the video area). 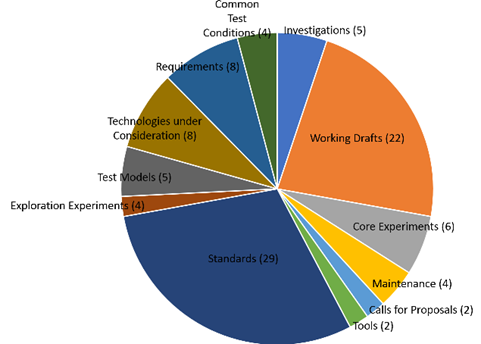 Figure 8: Activities at an MPEG meeting

For instance, out of a total of 97 activities:

Figure 8 does not provide a quantitative measure of “how many” documents were produced for each activity or “how big” they were. As an example, Point Cloud Compression has 20 Core Ex­periments and 8 Exploration Experiments under way, while MPEG-5 EVC has only one large CE.

MPEG holds quarterly meetings with an attendance of ~500 experts. If we assume that the average salary of an MPEG expert is 500 $/working day and that every expert stays 6 days (to account for attendance at AhG meetings), the industry investment in attending MPEG meetings is 1.5 M$/meeting or 6 M$/year. Of course, the total yearly investment made by the industry is more than that.

With the meeting organisation described above MPEG tries to get the most out of industry investment in MPEG standardisation.