The question then was: where should those standards be developed? The answer is provided by the following:

Standards have a special place in industry because they represent convergence points where the parties involved, who typically are in competition, find it convenient to agree on a single solution.

Many other standards organisations or industry fora exist at national/regional or industry level.

The International Organization for Standardization (ISO) is an international non-governmental standard-setting organisation founded in 1947 and composed of representatives from various national standards organizations.

ISO is a huge organisation whose technical branch is structured, as is the IEC’s, in Technical Committees (TC). The first 3 active TCs are: TC 1 Screw threads, TC 2 Fasteners and TC 4 Rolling bearings. The last 3 TCs in order of establishment are TC 322 Sustainable finance, TC 323 Circular economy and TC 324 Sharing economy.

Most TCs are organised in working groups (WG). They are tasked to develop standards while TCs retain key functions such as strategy and management. In quite a few cases the area of res­ponsibility is so broad that a horizontal organisation would not be functional. In this case a TC may decide to establish Subcommittees (SC) which include WGs tasked develop standards.

Figure 3 is an organigram of ISO. 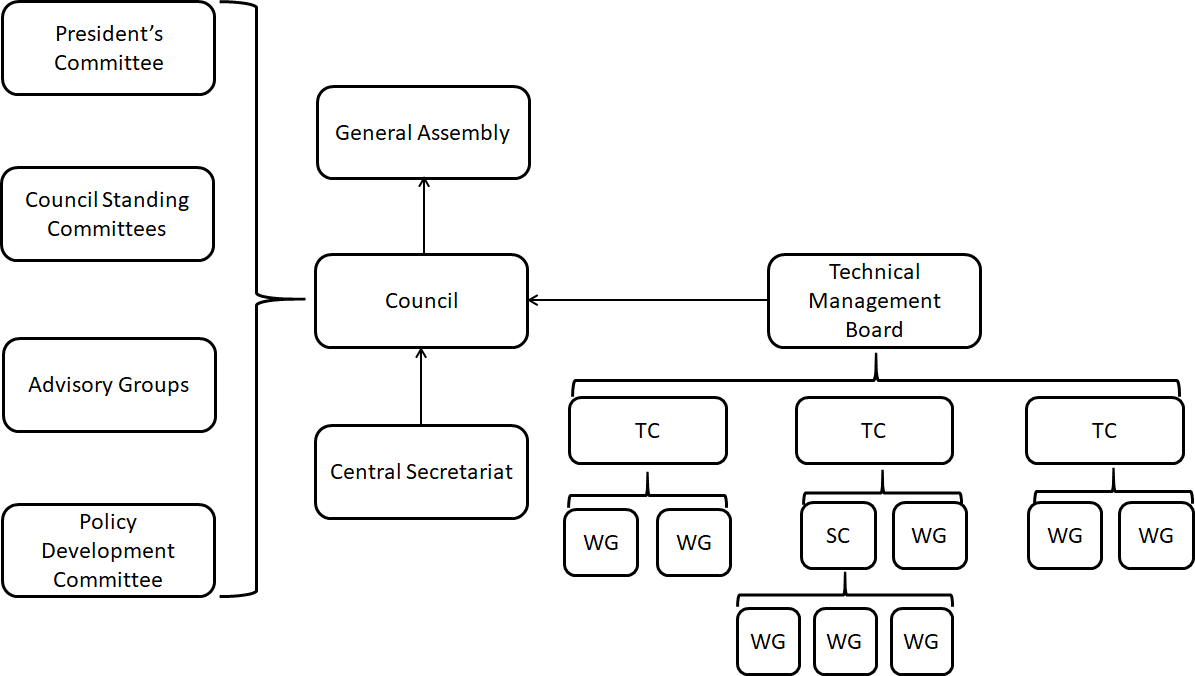 ISO and IEC share the standard development process which can be summarised as follows:

The last ballot is yes/no. No comments allowed.

ISO/IEC mandates that working groups operate based on consensus when they develop stan­dards. Consensus is defined as

General agreement characterised by the absence of sustained opposition to substantial issues by any important part of the concerned interests and by a process that involves seeking to take into account the views of all parties concerned and to reconcile any conflicting arguments.

ISO, IEC and ITU share a common policy vis-à-vis patents in their standards. Using few im­precise but hopefully clear words (as opposed to many precise but unclear words), the policy is:

A home for MPEG

When the MPEG idea took shape in July 1987, the selection of a home to implement the idea was the primary concern. The idea was spoilt for choices as shown by the list of international committees in  REF _Ref7082290 \h  \* MERGEFORMAT Table 1 that were created for various reasons – regulation or simply need for an independent technical reference – to cater to the needs of standards by the different industries.

Since MPEG was conceived to be industry-neutral, committees already developing standards in the “media” area were considered unsuitable because the represented “vested interests”. The choice fell on ISO TC 97 Data Processing who had SC 2 Character sets and Information Coding who included WG 8 Coding of Audio and Picture Information.

Note that Experts Group is an organisational entity not officially recognised in the ISO organ­igram. In 1991 SC 2/WG 8 seceded from SC 2 and became SC 29. WG 8’s Moving Picture Experts Group (MPEG) became WG 11 Coding of audio, picture, multimedia and hypermedia information (but everybody in the industry, and even in the general public, calls it MPEG).