What is less known, but potentially very important, is the fact that MPEG has already developed a few standards for compression of a wide range of other data types. Point Cloud is the data type that is acquiring a higher profile by the day, but there are many more types, as represented by the table below where standards are represented by the MPEG acronyms and the numbers in the respective columns are the part numbers.

Polygons meshes can be used to represent the approximate shape of a 2D image or a 3D object. 3D mesh models are used in various multimedia applications such as computer game, animation, and simulation applications. MPEG-4 provides various compression technologies

Imagine you have a face model that you want to animate from remote. How do you represent the information that animates the model in a bit-thrifty way? MPEG-4 Part 2 Visual has an answer to this question with its Facial Animation Parameters (FAP) defined at two levels: 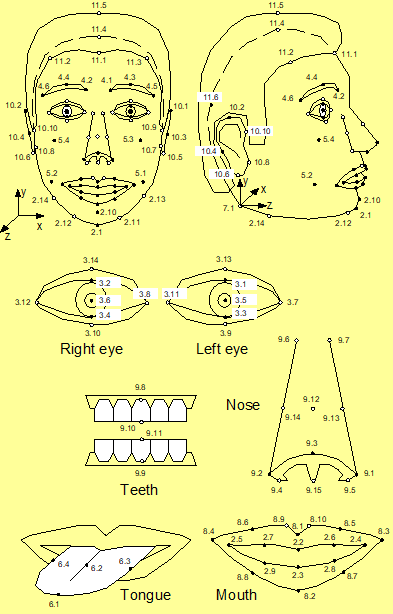 It is possible to animate a default face model in the receiver with a stream of FAPs or a custom face can be initialised by downloading Face Definition Parameters (FDP) with specific background images, facial textures and head geometry.

So far MPEG has never developed a Scene Description technology. In 1996, when the development of the MPEG-4 standard required it, it took the Virtual Reality Modelling Language (VRML) and extended it to support MPEG-specific functionalities. Of course, compression could not be absent from the list. So the Binary Format for Scenes (BiFS), specified in MPEG-4 Part 11 Scene description and application engine was born to allow for efficient representation of dynamic and interactive presentations, comprising 2D & 3D graphics, images, text and audiovisual material.

The representation of such a presentation includes the description of the spatial and temporal organisation of the different scene components as well as user-interaction and animations.

Many thousands of fonts are available today for use as components of multimedia content. They often utilise custom design fonts that may not be available on a remote terminal. In order to insure faithful appearance and layout of content, the font data have to be embedded with the text objects as part of the multimedia presentation.

Multimedia is a combination of multiple media in some form. Probably the closest multimedia “thing” in MPEG is the standard called Multimedia Application Formats. However, MPEG-A is an integrated package of media for specific applications and does not define any specific media format. It only specifies how you can combine MPEG (and sometimes other) formats. 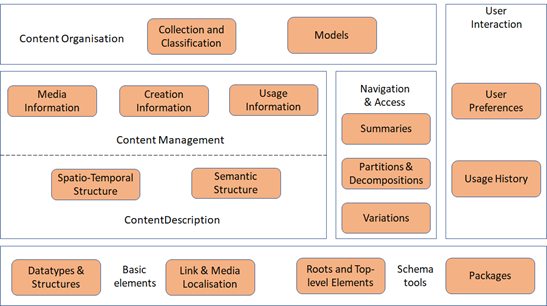 Requirements for neural network compression have been exposed in Moving intelligence around. After 18 months of intense preparation with development of requirements, identification of test material, definition of test methodology and drafting of a Call for Proposals(CfP), at the March 2019 (126th) meeting, MPEG analysed nine technologies submitted by industry leaders. The technologies proposed compress neural network parameters to reduce their size for transmission, while not or only moderately reducing their performance in specific multimedia applications. MPEG-7 Part 17 Neural Network Compression for Multimedia Description and Analysis are the standard name, the part number and the title given to the new standard.

MPEG-B part 1 Binary MPEG Format for XML (BiM) is the current endpoint of an activity that started some 20 years ago when MPEG-7 Descriptors defined by XML schemas were compressed in a standard fashion by MPEG-7 Part 1 Systems. Subsequently MPEG-21 needed XML compress­ion and the technology was extended in MPEG-21 Part 15 Binary Format.

In order to reach high compression efficiency, BiM relies on schema knowledge between encoder and decoder. It also provides fragmentation mechanisms to provide transmission and processing flexibility, and defines means to compile and transmit schema knowledge information to enable decompression of XML documents without a priori schema knowledge at the receiving end.

3D point clouds can be captured with multiple cameras and depth sensors with points that can number a few thousands up to a few billions, and with attributes such as colour, material properties etc.

MPEG is developing two different standards whose choice depends on whether the point cloud is dense (this is done in MPEG-I Part 5 Video-based Point Cloud Compression) or less so (MPEG-I Part 9 Geometry-based PCC). The algorithms in both standards are lossy, scalable, progressive and support random access to subsets of the point cloud.

MPEG plans to release Video-based PCC as FDIS in January 2020 and Geometry-based PCC Point Cloud Compression as FDIS in April 2020.

In the middle of the first decade of 2000’s, MPEG recognised the need to address compression of data from sensor and data to actuators when it considered the exchange of information taking place between the physical world where the user is located and any sort of virtual world generated by MPEG media.

Figure 43 describes the context of the MPEG-V Media context and control standard. 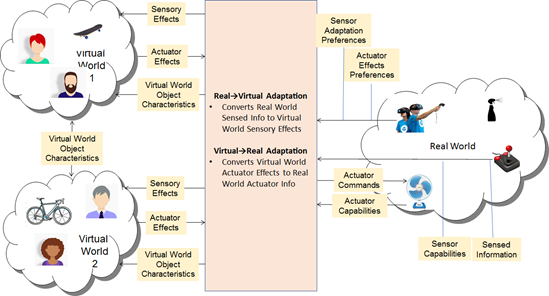 The chapter MPEG standards for genomics presents the technology used in MPEG-G Genomic Information Representation. Many established compression technologies developed for compression of other MPEG media have found good use in genome compression. MPEG is currently busy developing the MPEG-G reference software and is investigating other genomic areas where compression is needed. More concretely MPEG plans to issue a Call for Proposal for Compression of Genome Annotation at its July 2019 (128th) meeting.