All time that is spent saying that MPEG would not it be what it has become if the Systems aspects had not been part of most of its standards is well spent. This chapter adds more – well spent – time.

MPEG was not the first to deal with the problem of delivering digital audio and video bundled together. In the second half of the 1990’s ITU-T used the first digital streams made possible by ITU-T Recommendations to deal with the problem of transmitting audio-visual services using the basic ISDN access at 2B+D (2×64 kbit/s) or at the primary ISDN access. 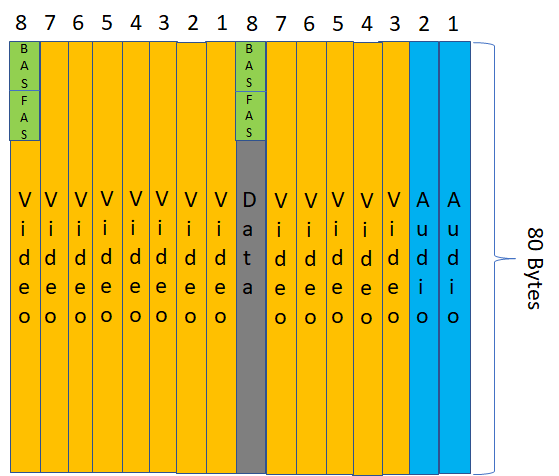 Let’s assume that we have 2 B channels at 64 kbit/s (Basic Access ISDN). H.221 creates on each B channel a Frame Structure of 80 bytes, i.e. 640 bits repeating itself 100 times per second. Each bit position in an octet can be considered as an 8 kbit/s sub-channel. The 8th bit in each octet represents the 8th sub-channel, called the Service Channel.

The solution depicted in Figure 1 bears the mark of the transmission part of the telecom industry that had never been much friendly to packet communication. That is why MPEG in the late 1990’s had an opportunity to bring some fresh air in this space. Starting from a blank sheet of paper (at that time MPEG still used paper 😊) MPEG designed a flexible packet-based multiplexer to convey in a single stream compressed audio, video and clock information in such a way as to enable audio‑video synchronisation (Figure 28).

In the early 1990’s MPEG started working on another blank sheet of paper. MPEG had designed MPEG-1 Systems, but the MPEG-2 requirements were significantly different. While in MPEG-1 audio and video (possibly many of them in the same stream) had a common time base, the main users of MPEG-2 wanted a system that could deliver a plurality of TV programs, possibly coming from different sources (i.e. with different time bases) and typically with a lot of metadata related to the programs, not to mention some key business enabler such as conditional access information. Moreover, unlike MPEG-1 where it was safe to assume that the bits issuing would travel without errors from a Compact Disc to a demultiplexer, in MPEG-2 it was mandatory to assume that the transmission channel was anything but error-free.

MPEG-2 Transport Stream (TS) provides efficient mechanisms to multiplex multiple audio-visual data streams into one delivery stream. Audio-visual data streams are packetised into small fixed-size packets and interleaved to form a single stream. Information about the multiplexing structure is interleaved with the data packets so that the receiving entity can efficiently identify a specific stream. Sequence numbers help identify missing packets at the receiving end, and timing information is assigned after multiplexing with the assumption that the multiplexed stream will be delivered and played in sequential order.

The structure of the transport bitstream, organised in fixed-length packets of 188 bytes of which 184 bytes are used for the payload, is depicted in Figure 29.

Figure 30 shows thatMPEG-2 Systems is actually two specifications in one. The Transport Stream (TS) is a fixed-length packet-based transmission system designed for digital television distribution on error-prone physical channels, while the Program Stream (PS) is a pac­ket-based multiplexer with many points in common with MPEG-1 Systems. `While TS and PS share significant common information, moving content from one to the other may not be immediate. 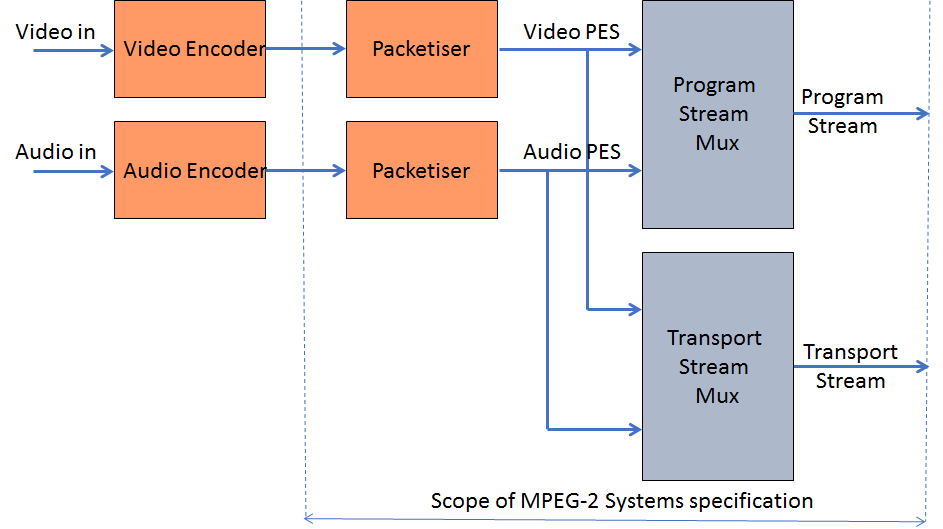 MPEG-4 gave MPEG the opportunity to experience an epochal transition in data delivery. When MPEG-2 Systems was designed, Asynchronous Transfer Mode (ATM) was high on the agenda of the telecom industry and MPEG considered it a possible vehicle to transport MPEG-2 TS streams on telecommunication networks. Indeed, the Digital Audio-Visual Council (DAVIC) designed its specifications on the assumption that MPEG-2 based Video on Demand services would be carried on ATM because at that time IP was still unknown to the telecom (at least to the transmission part), broadcast and consumer electronics worlds.

The MPEG-4 Systems work was a completely different story than MPEG-2 Systems. An MPEG4 Mux (M4Mux) was developed along the lines of MPEG-1 and MPEG-2 Systems. However, MPEG had to face an unknown world where many transports were surging as possible candidates. Today, 25 years later, the choice is clear, but at that time MPEG was unable to make choices – and it would not even be its task. Therefore MPEG developed the notion of Delivery Multimedia Integration Framework (DMIF), where all communications and data transfers between the data source and the terminal were abstracted through a logical API called the DMIF Application Interface (DAI), independent of the transport type: storage (local interactivity), network (remote interactivity) and broadcast (one way interactivity.

MPEG-4 Systems, however, was about more than interfacing with transport and multiplexing. The MPEG-4 model was a 3D space populated with dynamic audio, video and 3D Graphics objects. Figure 31 provides an example of MPEG-4 scene with 3D graphic objects and 2D video sprites.

Binary Format for Scenes (BIFS) was the technology designed to provide the scene description functionality, obviously in compressed form. 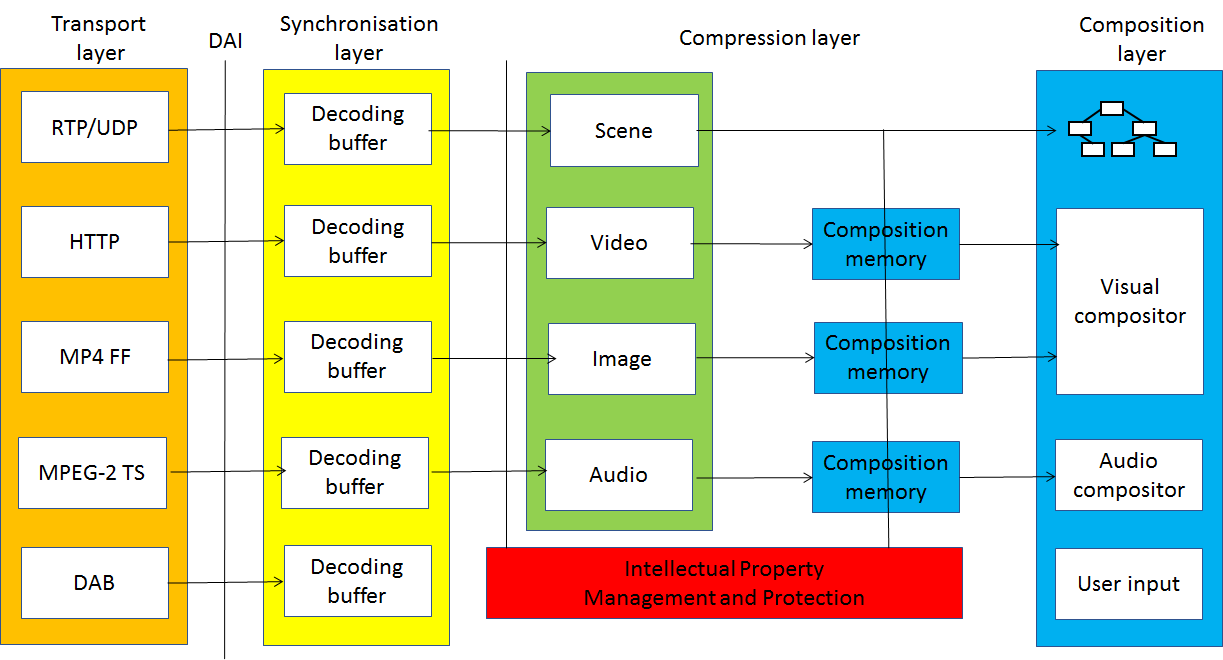 For almost 10 years – until 1997 – MPEG was a group making intense use of IT tools (in the form of computer programs that simulated encoding and decoding operation of the standards it was developing) but was not an “IT group”. This can be seen from the fact that, until that time, it had not developed a single file format. Today MPEG can claim to have another such attribute (IT group) along with the many others it has.

In those years MP3 files were already being created and exchanged by the millions, but the files did not provide any structure, if not the one designed by the Audio group. The MP4 File Format, officially called ISO Base Media File Format (ISO BMFF), filled that gap as it can be used for editing, HTTP streaming and broadcasting.

Let’s have a high-level look to understand the sea that separates MP3 files from the MP4 FF. MP4 FF contains tracks for each media type (audio, video etc.), with additional information: a four-character the media type ‘name’ with all parameters needed by the media type decoder. “Track selection data” helps a decoder identify what aspect of a track can be used and to determine which alternatives are available.

Data are stored in a basic structure called box with attributes of length, type (expressed by 4 printable characters), possibly version and flags. No data can be found outside of a box. Figure 33 shows a possible organisation of an MP4 file 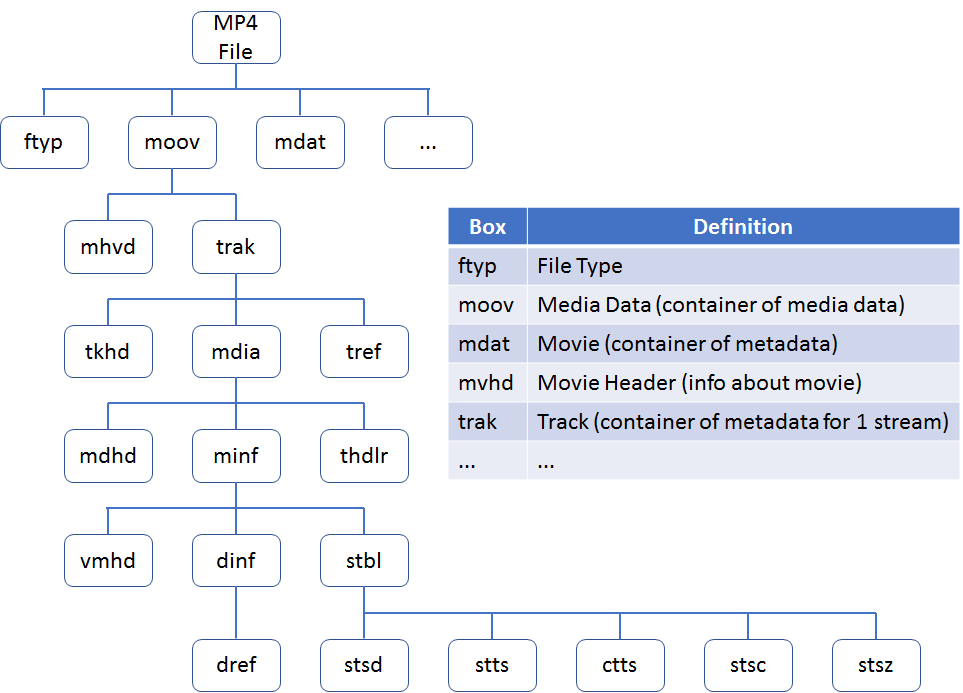 The first two features were in the original specification. The last two are still under development. All others were added in the years following 2001 when MP4 FF was approved.

With MPEG-7, MPEG made the first big departure from media compression and turned its attention to media description including ways to compress that information. In addition to descriptors for visual audio and multimedia information, MPEG-7 includes a Systems layer used by an application, say, to navigate a multimedia information repository, to access coded information coming from a delivery layer in the form of coded descriptors (in XML or in BiM, MPEG’s XML compression technology). Figure 34 illustrates the operation of an MPEG-7 Systems decoder. 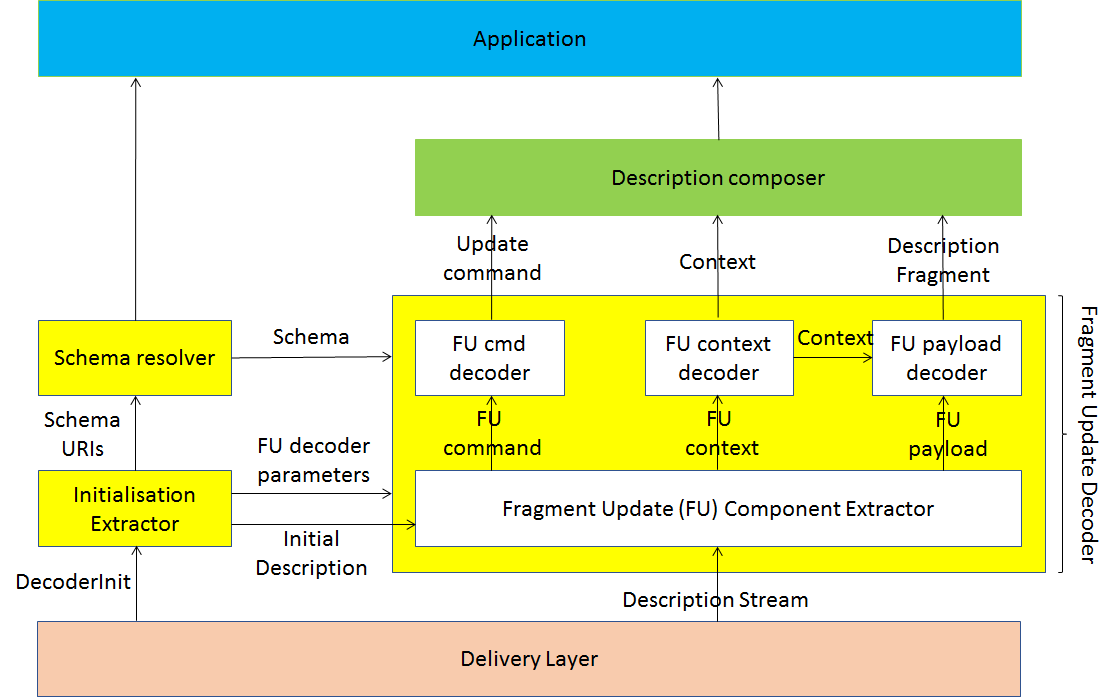 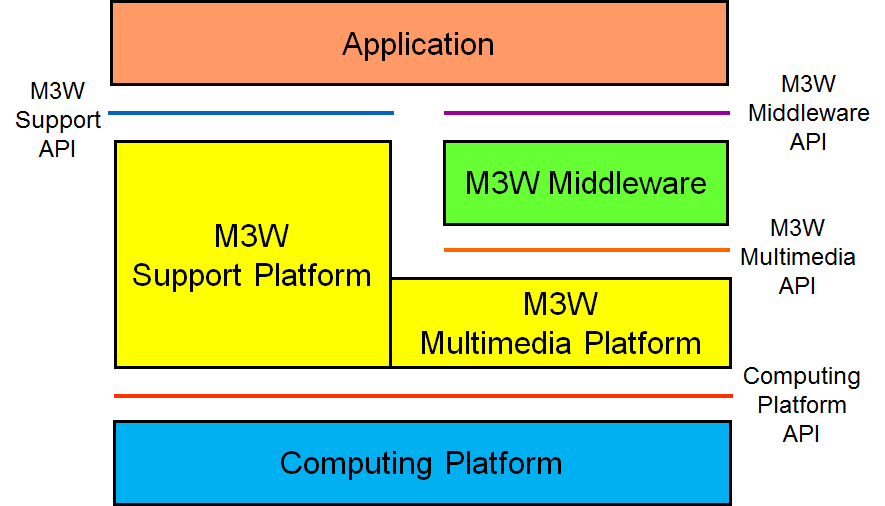 As shown in Figure 36, the first component is API: High-Level API for applications and Low-Level API for network, energy and security.

MPEG Media Transport (MMT) is part 1 of High efficiency coding and media delivery in heterogeneous environments (MPEG-H). It is the solution for the new world of broadcasting where content can be delivered over different channels each with different characteristics, e.g. one-way (traditional broadcasting) and two-way (the ever more pervasive broadband network). MMT assumes that the Internet Protocol is the transport protocol common to all channels. 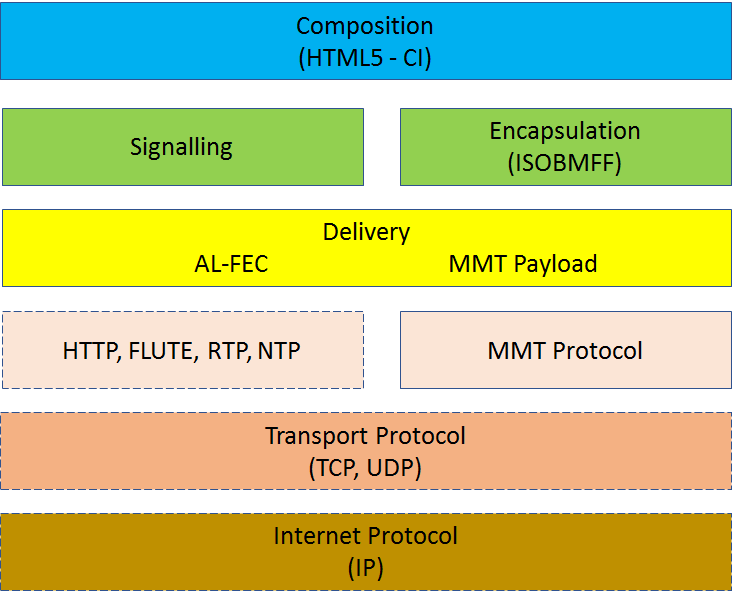 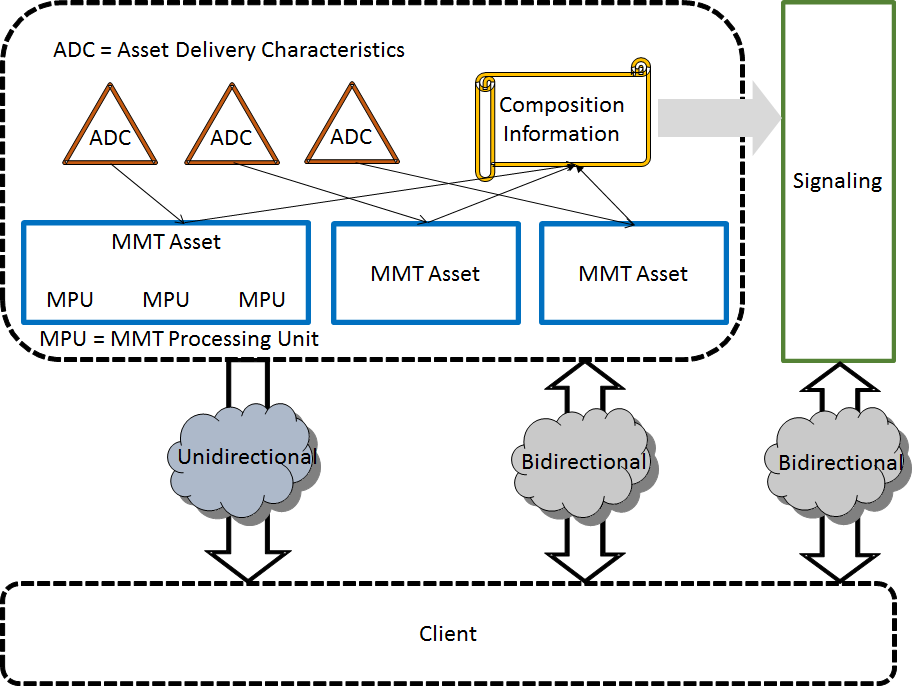 As depicted in Figure 40, the multimedia content is stored on an HTTP server in two components: 1) Media Presentation Description (MPD) which describes a manifest of the available content, its various alternatives, their URL addresses and other characteristics, and 2) Segments which contain the actual multimedia bitstreams in form of chunks, in single or multiple files.

A typical operation of the system would follow the steps

DASH only defines the MPD and the segment formats. MPD delivery and media encoding formats containing the segments as well as client behavior for fetching, adaptation heuristics and content playing are outside of MPEG-DASH’s scope.

This is not an exhaustive presentation of MPEG Systems work. Still the description will reveal the amount of work that MPEG has invested in Systems aspects, sometimes per se, and sometimes to provide adequate support to users of its media coding standards. Different standards compete for the palm of the most successful MPEG Systems standards. For sure the MPEG-2 Systems standard is a strong competitor: 9 editions have been produced to keep up with continuous user demands for new functionalities.

6.3 – MPEG is working for more success